Meet Mkate Man: The Guy Who Ate Bread As He Queued To Vote 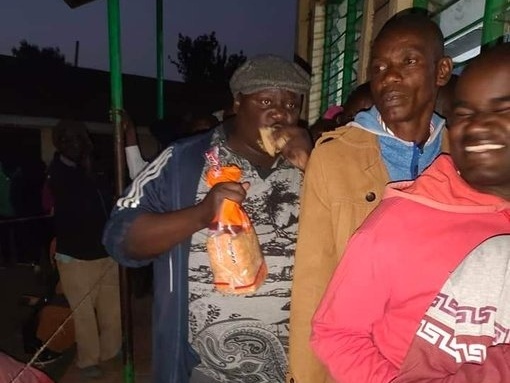 Who is Mkate Man?.

Last election (2017) a guy went viral for eating Githeri on the voting queue and this year’s election 2022 has brought up another interesting guy.

Another guy who is trending in Kenya for waking up very early in the morning to go vote for his preferred candidate while eating breakfast (mkate) on the line in Kisumu.

The photos of Mkate Man are now going viral online and here is what you need to know about the guy behind the viral Mkate Man pictures.

Mkate Man who is going viral in the 2022 Kenya general election is a Philanthropist.

His real name is Silas Odhiambo, a philanthropist based in Kisumu county, shared amusing photos showing him at the polling station today morning.

Referring to himself as Boflo Man, Silas has a lot of Kenyans talking on social media and his pictures being used all over the internet.

Also Read:  Boxing: Eric Omondi VS Khaligraph Jones, Eric Omondi and Papa Jones Fight
Place this code at the end of your tag:
Subscribe To Our YouTube Channel