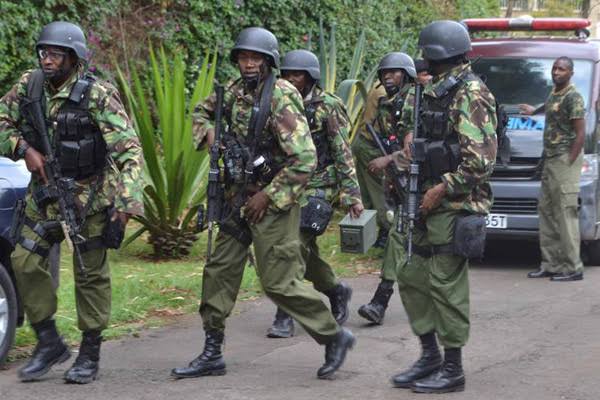 How much are the Most Trained and Highly Skilled with Tactics Police unit paid per month in Kenya.

Here is the gross monthly income of the Recce Squad unit which is a special unit within the GSU service.

When it comes to highly specialized weapon equipments and tactics, the Recce Squad are the most powerful police unit in Kenya.

The Recce Squad Unit is the same squad that guards the President Of The Republic Of Kenya.

There are three main Units in the Recce Kenya Squad.

The Sky Marshal Unit are highly trained to mostly deal with terrorists on a mission to hijack an aircraft in the air.

This squad unit uses undercover tactics to deal with the terrorist.

The Crisis Response Team unit are one of the most flexible units, they are always 24/7 on standby to react to any critical situation that may occur in the country at any point, anywhere.

The Rendition Operation Team unit deals with any top level security matters that may arise in the country.

The Rendition Operating Team unit receives its high quality training and tactics in Israel and the United States.

The unit is extraordinary qualified to deal with terrorism cases in Kenya and save lives of innocent citizens who are hold victims of a terrorist attack.

With that said, what is the monthly salary of the most specialized unit in the country?.

Below is how much a Recce Squad Officer makes as their monthly salary.

In general, the monthly average salary of a Recce Square Commando in Kenya is around Ksh. 36,000.

This salary does not include the allowances, Bonuses and other benefits they receive per month for being in the Recce unit.

As a result, the Recce Squad unit that guards the president of Kenya receives upto Ksh. 25,000 extra depending on various factors. (duties assigned).

The other units will receive up to Ksh. 17,000 per month depending on certain factors such as duties assigned to a police.

The Recce squad unit receives monthly allowances on the following;

That is the average monthly salary a Recce Squad Commando is likely to make per month, but the amount changes with, rank and duties assigned to an offer that month.